*scroll to bottom for review*

Title: If He Wakes 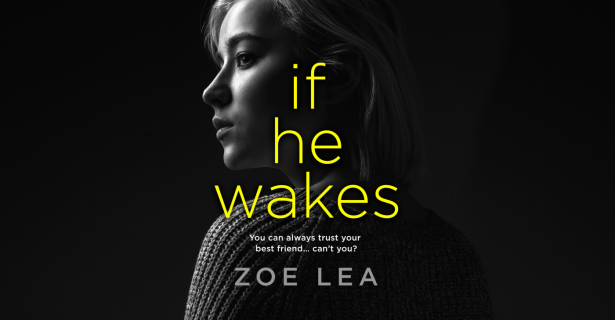 Book Blurb: You can always trust your best friend… can’t you?

When Rachel discovers a Twitter message arranging a romantic liaison she assumes her husband is having an affair, and follows him. What she witnesses is so much worse: a hit and run using his car.

Meanwhile, Rachel’s friend and business partner Suzie is increasingly worried about her fiance, who’s not been in touch for days. When Suzie learns of huge debts racked up in her name she fears he has run out on her, but then the threatening calls start and she thinks something terrible has happened.

Rachel and Suzie are both about to learn shocking things about the men they love, worse than they could ever imagine… Can their friendship survive?

‘A tense, pulse-quickening tale. If you read the first chapter, you can’t help but read the second. I flew through this perfect summer read of best friends in turmoil in one feverish session.’ Paula Daly

Zoe Lea lives in the Lake District with her husband, their two children, three dogs and peregrine falcons. She has previously worked as a teacher, photographer and freelance journalist and is a writer in the day and a reader by night. If He Wakes is her debut novel.

Every now and again a new author comes along with a debut novel that knocks you off your feet. Zoe Lea is one of these authors and If He Wakes is one of those books.

Rachel, a happily married Mum of two, accidentally finds some very unexpected and upsetting messages on her husband Phil’s Twitter account, arranging to meet someone at a local hotel in the middle of day. Obviously, she immediately assumes that he’s up to no good and decides to follow him to the hotel to see what’s going on. While following him, she sees something perhaps worse than meeting with another woman – Phil hitting a pedestrian at a crossing, and speeding away. She can’t believe what she’s seeing & to make matters worse she is shunted from behind, and breaks her leg in the process. Now she’s immobile, drugged up on painkillers and trying to figure out whether or not her mind is playing tricks on her, or if she really did just see her husband put someone in intensive care and drive away?

Suzie is Rachel’s business partner, and more importantly, her best friend, is trying to keep the business on its feet while Rachel is laid up with her broken leg. She discovers to her horror that her bank cards have been frozen and while trying to find her photographer fiancé Adam, who controls all of their finances through questionable business practices, she finds that she is not the only person looking for him. He is in a remote part of Wales with a dodgy signal, however as time moves on and we learn more about his behaviour and his financial situation, it becomes more and more obvious that his wi-fi signal is not his biggest problem.

Told from the different viewpoints of Rachel and Suzie, who are both struggling with their own, growing, personal horror at the same point in time, this novel takes you on a breath-taking journey – it shows the limits of friendship, and just how honest people are prepared to be with each other, especially when the truth is too horrible for them to even contemplate.

With some clever twists and a really believable, disturbing plotline, Zoe Lea’s debut is bound to be a huge hit and rightly so.